The archaeological objects are acquired mainly from archaeological excavations, gifts and sometimes by purchases. The main purchase took place in 1964 (the Sadnikar’s Collection), in 2007 the Museum purchased some objects from Trojane, while the majority of archaeological material is acquired as a result of regular activities, performed in compliance with heritage-protection consents granted by the Ministry of Culture of the Republic of Slovenia. Among archaeological objects you can find metal objects, such as axes, needles, fibulas, various blades – knives, spear-shaped points, decorative objects, jewellery from different pre-historian metal ages, as well as older stone tools and younger, mainly antique, vessels and jewellery. The majority of the archaeological stock consists of archaeological material excavated around Trojane. So far in the Museum we have inventoried more than 2500 fragments and more or less all the objects excavated by Mirina Zupančič in 1966, 1970 and 1975. A great part of the storage and museum showcases are filled with archaeological finds from Mali grad, the ruins of a castle on the hill in Kamnik. This hill has been of great importance for Kamnik and its development and was explored by dr. Milan Sagadin in the years 1978, 1979, 1982, 1986, and in 1990 – 1992 until 1994. The archaeological stock consists of archaeological objects from the territory of seven former municipalities, which once formed a network, managed by the Kamnik Museum. Material from this area is still being acquired by our museum. During the past decade we have acquired material from Velika Planina (excavations by T. Cevc, J. Železnikar), from Krtina (excavations by D. Snoj in 1989, 1999), Trojane (excavations by Draško Josipovič in 2003), from Šentpavel near Dragomelj (excavations of a roman villa in 2001 by Arhej d.o.o.) and excavations, led by our museum in the years 2006 and 2007 on Onger hill above Trzin. Coming to the archaeological storage and to the museum showcases are well-preserved objects form the Suhadole well (excavations by J. Hrovat in the year 2000) from Grdavov hrib (excavations by M. Sagadin and M. Bremšak in 1996) and from other sites in Kamnik and neighbouring municipalities.

An iron seal ring of a senior Roman military figure with a portrait engraving on an inserted silver plate and the inscription ABVNDANTI, represents an exceptional piece of jewelry from the middle of the 4th century. Bronze buckets with handles. Iron attachés were attached to the mouth. The handles of the buckets were also made of iron. They held about a liter, 2.8 or 8.5 liters of water.

The rumbler bell is an object intended for making sounds, similar to a small bell. Their usefulness was very different.

A piece of tombstone with a griffin motif, a mystical creature with a lion's body or the body of a sea monster and with wings. 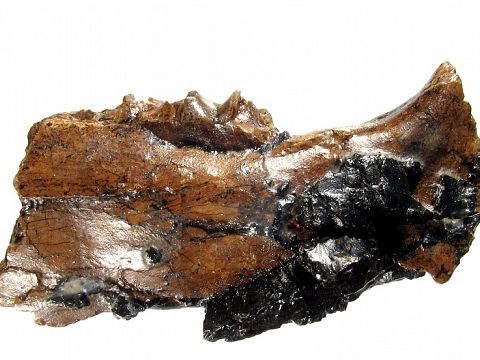 The museum holds a portion of the mandible of the Dwarf Rhinoceros from Motnik. This is the oldest item in our collections. The grave was found at Toma Brejca Street no. 20. Kamnik. It dates from the second half of the 13th - first half of the 11th century B.C. Tinder on a chain

Biconcave or lenticular tinder on a chain, Iron, 13th century, Mali grad. In addition to their practical significance, firecrackers also have a symbolic meaning. 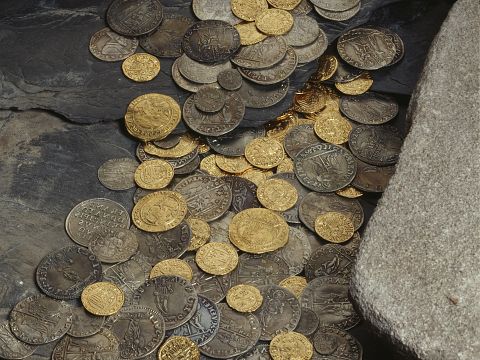 Treasure find of more than 1800. coins from the middle of the 16th century. In 1956, a secret burial was found by a local, at a house with the local name "Pri šacu - By the treasure".

Buckles - fibulae were intended for fastening clothes, mainly worn by women.
Three are made of bronee, one is silver. The bell was donated to the museum by the finder in 2016 for the exhibition Na planincah luštno biti … and later for permanent preservation. Tombstone of the Dindii, Second half of 1st century, Kamnik

The tombstone was discovered around 1830 in Kamnik, under the Zaprice castle. It was later built into the wall of the former pub Pri Krištofu, now called Ideja Kamnik (Šutna 35), from where it was moved into the museum’s lapidarium in 1968.

The jugs have two handles and were most likely made on the same pottery spindle. They are between 24 and 28 cm high and can uphold from 1.7 to 2.5 litres of liquid.

In 1928, farmer Kregar hit unusual objects while plowing with a plow in Romšak's field in Vrhpolje near Kamnik. Among them was a "tin vessel," as he himself told Sadnikar, two spearheads and an ax. Her path and destiny is extremely interesting ...

Stone urn with a lid, 2nd century A. D., Mengeš

The stone urn with a plate was foun in 1979 in Mengeš. In the grave were two balsamariums, a ribbed glass bowl and an iron knife. The Mejač family found the statue in 1899 in a well in Sidol. It lay about a meter deep. It was part of Sadnikar's collection and in 1964 it was bought by the Kamnik Museum. 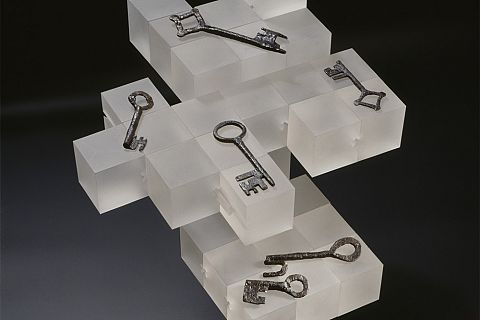 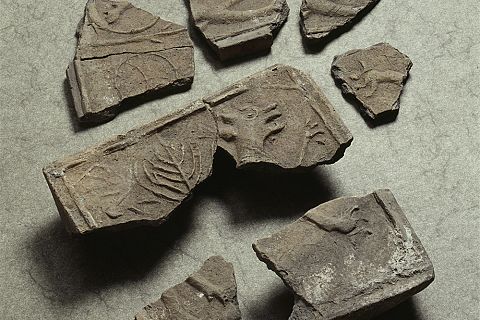 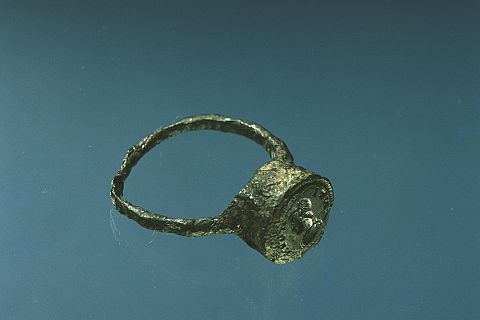