In June 1965, Stane Uršič found a grave with described contents on the lot nr. 707/16 cadastral zone Kamnik. The grave was covered with a stone slab carved from the sandstone. He immediately informed the Kamni Museum about the find. The competent curator of archeology, former director of the museum, Mirina Cvikl Zupančič, found that it was a grave that was dug up to 30-50 cm in river gravel.

The ash was in the run. After anthropological analysis of 3.5 g of bone (made by Prof. Dr. Joachim Wahl from Germany) it was not found whether it was a man or a woman. The similar needles were  found in northeastern Italy, and precisely on the basis of such needles, the grave is dated at an early time of the urnifield culture, in the late 13th to the first half of the 11th century BC. On the contrary, we find analogies for such urns and bowls in the east, in the area of ​​Poland, eastern Germany and Slovakia, which means that the bronze-age “Kamnik population” had contacts with cultural groups east and west of us.

It is one of the oldest graves of this time found in Slovenia, indicating that Kamnik with its hinterland was probably inhabited throughout the whole Bronze Age. 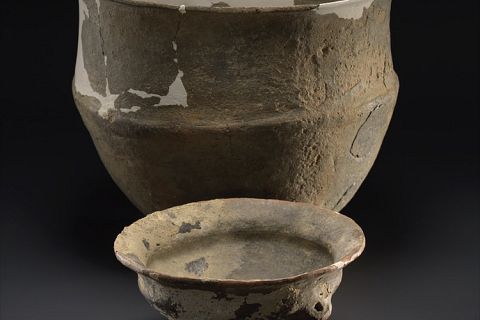