Somewhat younger, but still inconceivably old, tertiary rocks from the former Pannonian Sea have been preserved on the outskirts of the Kamnik-Savinja Alps (the Tertiary began about 64 million years ago and ended 1.6 million years ago). They can be found in the valleys of Kamniška Bistrica and Lučka Bela, in Črnivec, in the Tuhinj valley and in the Tunjice hills. Various fossils are found everywhere. Most often these are the remains of corals, shells, snails, remains of fish, crustaceans and even whales. In the territory of present-day Tuhinj valley, shallow lakes were formed and partially dried up. In such an environment, the layers of coal that were dug in the vicinity of Motnik during the 19th century were also deposited. Plant remnants such as redwoods, ferns, special types of pines, swamp cypresses, palm trees, figs, laurels, eucalyptus and cinnamon show a very warm climate. In Motnik were found the remains of various mammals and crocodiles in coal in the 19th and 20th centuries. The most famous of these is the dwarf Rhinos Meninatherium telleri. It is supposed to represent a new genus and a series of dwarf rhinos, named after Menina Mountain and after geologist Friedrich Teller. Later, however, this species was included in the already known genus Prohyracodon.

The museum holds a portion of the mandible of this extinct animal. This is the oldest item in our collections. It dates back to the Oligocene (about 25 million years ago). 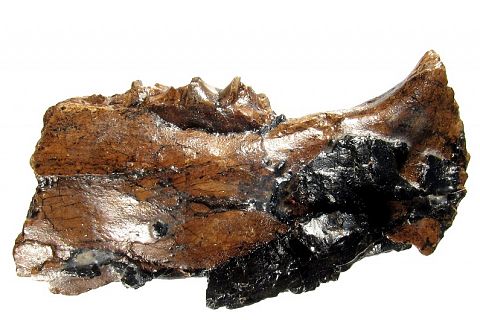