The treasure finding of coins from Češnjice in the Tuhinj valley

The found treasure which contained more than hundred gold coins, mostly Hungary ducats, some Spanish doble excellente and more than thousand, five hundred silver coins, mainly Venetian liras and some copper coins, might indicate that the coins were owned by the merchant who in the middle of the 16th century traded long distance – from Spain to Hungary.

The astonishing find came on April 1956 in Češnjice in the Tuhinj Valley. As they remodelled the basements, they found a broken pot, 40 cm deep, filled with money. It also contained a leather pouch that was partially preserved. Strongly oxidized was just a crush, so it is believed that it was stored in a pouch while the rest of the money was in a pot. As can be seen today, the find numbered over 1,500 pieces of silver and well over 100 pieces of gold. Of these, 13 doubles, 56 ducats and 900 silver coins have been scientifically treated.

Although the National Museum in Ljubljana took action, much of the money was lost or destroyed. Several gold coins were melted and used for dental gold or jewellery and other purposes. Most of the gold coins were destroyed because of their high material value, and a larger amount of silver coated with green patina was simply dumped into the manure pit because they were considered worthless. There was a lot of change between these two coins, which would help to determine when they buried the money.

Why was the treasure hidden? According to the last dated coin, the treasure was buried after 1554. At this time, there is no known historical event that would have caused such a large find. After 1532, after the battle at the fortress of Kisek in Hungary, a kind of calm began. Turkey’s incursions have completely ceased for two decades with few exceptions. In the years 1558-1561, the incursions to Kočevje and to Postojna are known, these are also the last incursions before the invasion in 1574-1578. Turkish danger is clearly not the real reason for the burial. Was it fear of robbery, famine, plague or something else? Was it buried by a long-distance trader?

The exact reason for the burial will probably never be discovered. That is why treasures are something special. They never cease to stir spirits and imagination … 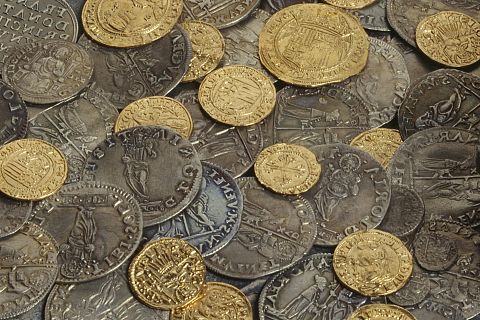