The bell was given to the museum by the finder in 2016 for the exhibition Na planincah luštno biti … and later for permanent preservation.

Mr. Danijel Holcar’s words about the finding were: “When I was 8 years old, in 1966, I went hiking with my father Ladislav. He spotted something gold sparkling beside the path. He thought that an object made of brass is lying in the soil. At home, he threw the object into a wooden trunk, where he collected brass to drive to the dump. I attended a lecture that
Dr. Tone Cevc held at a high school in Kamnik about the mountain pasture Velika planina and I took the bell with me. Tone Cevc was very excited, so he borrowed the bell from me and took it with him to Ljubljana and later informed me about their discoveries.”

The bell was worn by cattle and horses. It dates from the 1st century A. D. and provides evidence that this area was used for grazing already in the antiquity. 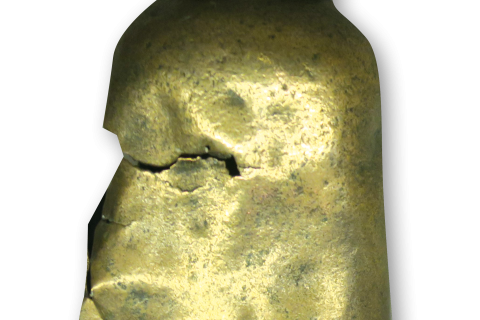