The collection comprises museum objects of applied arts from the late Middle Ages until the 20th century, which occurred or were used within the remit of the Museum. The collection shows furniture, lamps, clocks, tableware, textile and everyday small objects, made of various materials (seals, pipes, spoon holders, jewellery, fashion accessories...).

The smallest portable or positive organ, made by masters from Ljubljana – Marcus Göbl and Joannes G. Eisl in 1743, could still be used for concerts on special occasions. Among our culture-historical collections there is one which is well-known and of great importance in Slovenia: Sadnikar’s Collection. 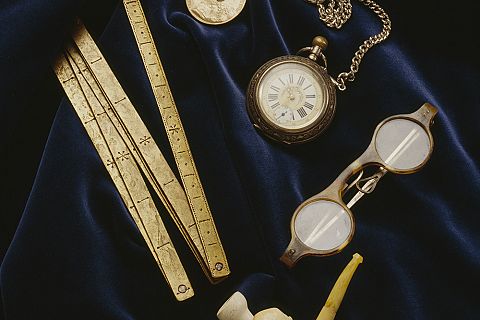 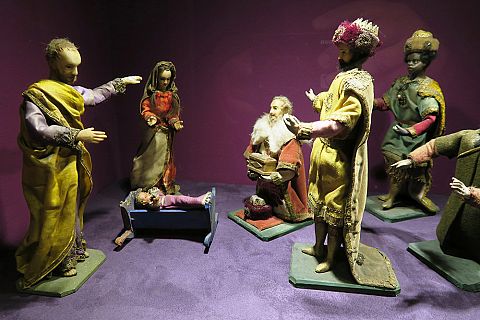 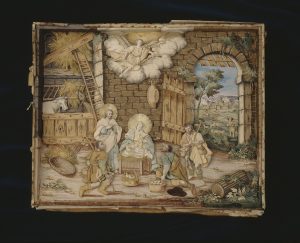 The oldest museum collection in Kamnik was founded in 1893 by Josip Nikolaj Sadnikar, an amateur collector, patron and veterinary. At the same time this was the first private museum collection opened to the public in Slovenia. In over sixty years of collecting he collected more than 4000 items and in 1952, when he died, this was one of the biggest collections of its kind. In his museum a variety of objects found their place; amongst others, archaeological objects, objects of everyday use, as well as special and precious objects, such as books, manuscripts, archive documentation, and a gallery of sacred art and paintings. He collected objects by exchanging them, by receiving them as gifts, by purchasing them. Sadnikar’s knowledge and passion for collecting antiques was known not only in Kamnik, but for miles around. In 1937 he was granted the title of Honorary Citizen of Kamnik for his versatile life’s work.

In 1950 the Institute for the Protection of the Cultural Heritage of Slovenia rendered a decision on protection of the unique Sadnikar’s museum collection. Kamnik municipality even planned to buy the house together with the complete collection. But due to economic problems of that time Kamnik municipality could not afford to fulfil this ambitious plan. It was decided to buy only a part of the collection for the new museum at the Zaprice Castle, established in 1961. External experts and specialist-appraisers of art helped to select and purchase the objects, which were by their use and place of origin related to the Kamnik region. In 1964 the Inter-municipal Museum Kamnik purchased 1468 objects. The museum now houses the re-named Sadnikar’s collection, comprising some of the most beautiful and precious objects, such as a rare edition of Dalmatin’s “Bible”, Valvasor’s “The Glory of the Duchy of Carniola”, tin guild jugs, house altars, beehive panels, walking sticks, glass paintings etc. 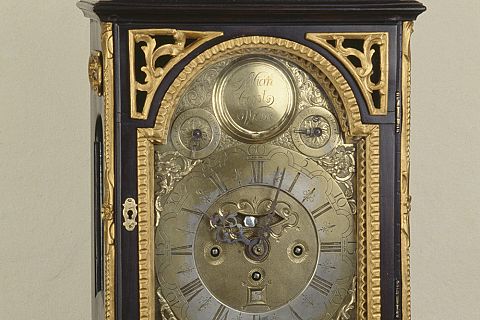 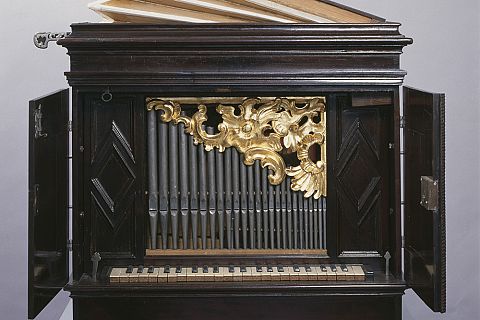 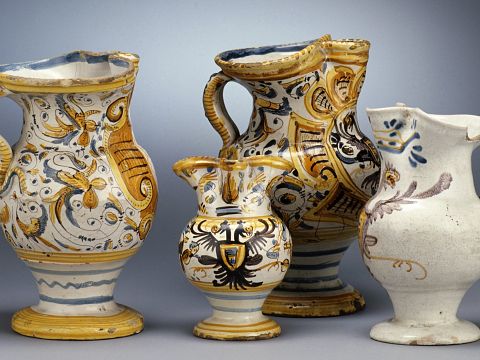 Majolica, the end of the 18th century

Majolica is a special form of drinking jug, which began to develop in Italy from the Renaissance time.

Watchmaking craft has a long tradition in Slovenia and with the help of written sources we can follow it from the beginning of the 16th century. 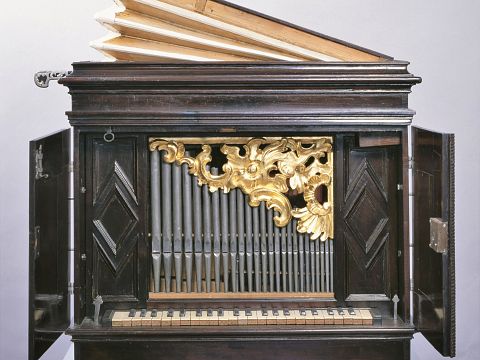 The portable organ was produced by Marcus Göbl and Joannes G. Eisl in Ljubljana and represents one of the smallest organ instruments in Slovenia.

In front of us there is a silver snuff box, used by an unknown nobleman in the middle of the 19th century and worn around her neck.

A typical form of drinking tin for special occasions, widely used in the 17th and 18th centuries, was guild mugs.

Decorative plate with a motif of flowers with butterfly, slightly embossed on a gray relief background. At the bottom of the brand Schütz Cilli 619. 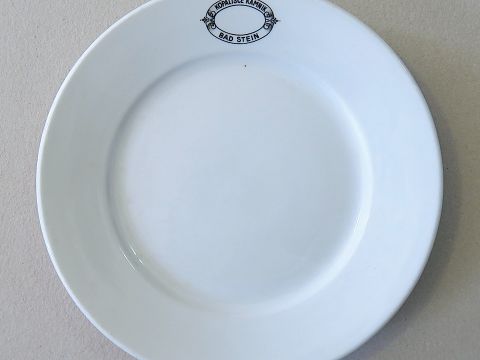 The plate from Prašnikar's bathing place and the spa in Kamnik, probably a dessert plate, is made of white porcelain, with an oval black sign with the inscription Kopališče Kamnik - Bad Stein. 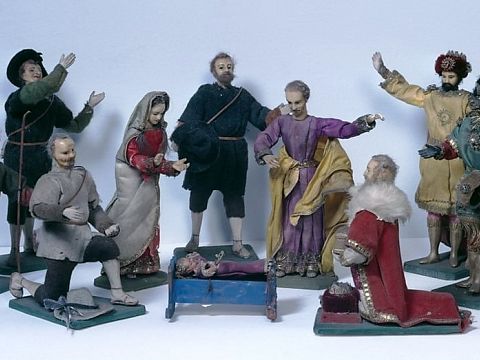 Preserved mansions are from the 18th century and were intended for ecclesiastical purposes. Their specialty is that they are made of different materials. 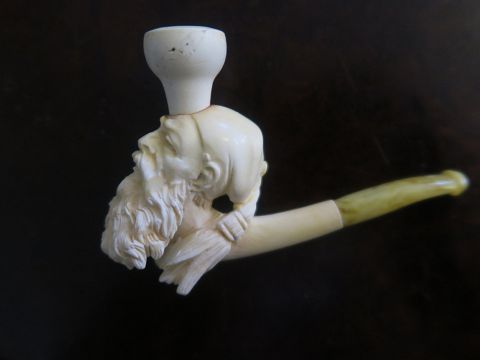 Faucet, second half of the 19th century

The head of the pipe is carved from a seal foam or sepiolite in the form of an old bearded man with a night cap on the head. At the top of the head is a smoke release. The mouthpiece is made of horn. 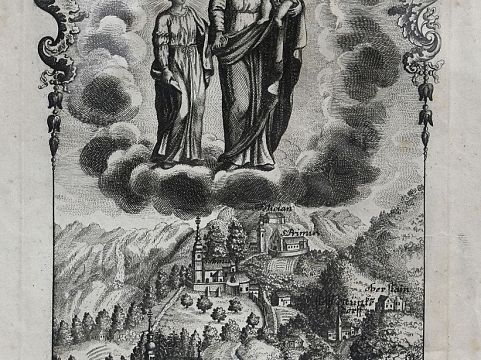 Pilgrimage with St. Anne, middle of the 18th century

The portrait of "General Wachtmeister" Mihael Pregl is painted completely frontally, in a standing position. He holds a rifle in his right hand, he has a helmet on his right leg, and a dog on his left leg. 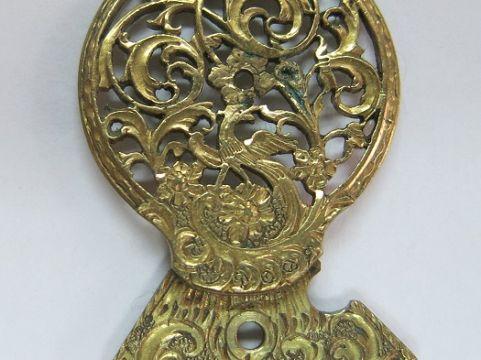 The “Watch bridge” (Uhrbrucke) is a supporting element in the mechanical mechanism of the watch, which is screwed to the plate on both sides. 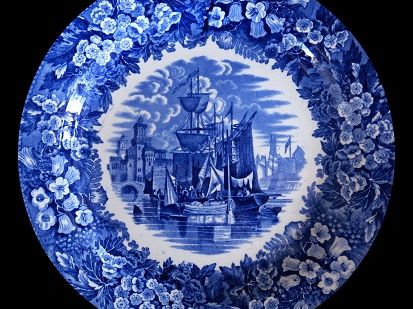 Plate, edible, shallow, from food service, stoneware dishes. At the bottom of the Wedgwood brand. The motif of a cargo ship with sails in front of the port is recognizable, with floral ornaments in blue on the edge of the plate.

A pair of porcelain figurines consisting of two ladies from the time of King Louis XVI of France. (1770-1780) and a cavalier from the copf style period (ca. 1770-1780). They are both dressed in the typical dress of the upper class of the 1770s.

Reliquary is in Christianity, a chest for storing and worshiping the remains of St. cross, remains of martyrs, saints, their clothing, etc. Reliquaries are often artistically designed, gilded and richly decorated and have great artistic value.