Preserved mansions are from the 18th century and were intended for ecclesiastical purposes. Their specialty is that they are made of different materials. The base of each figurine is a wooden stick, on which the wax made the face, hands and feet of wax, partly from plaster, and they were dressed in a suitable fabric. Particularly valuable are the coats of the holy three kings, where the fabric is wrapped in a gold thread. As a special feature, however, the figurine maker gave Maria the real human hair. The cribs consist of members of the sacred family: Jesus, Mary, Joseph, three holy kings and shepherds.
The cribs were initially set up exclusively in churches, especially in the anti-Reformation period by Jesuits, Franciscans and Dominicans. In Slovenia, for the first time, they are mentioned in 1644 in the Jesuit Church of St. Jakob in Ljubljana. Although Emperor Joseph II. at the end of the 18th century even banned. The cribs brought closer the mystery of Jesus’ birth to simple people.
By private homes, the crib began to be more or less put up in the 18th century, after the noble homes, and then in the bourgeois. In rural homes, simple cribs arrived only in the second half of the 19th century, and were widely used at the end of the 19th century and after 1900.
Figurines for private use were made of paper or cardboard, and they could be clad with silk, at the end of the 19th century, they were carved out of wood or cast out of plaster. They could be set up independently or fixed in so called locker cribs. 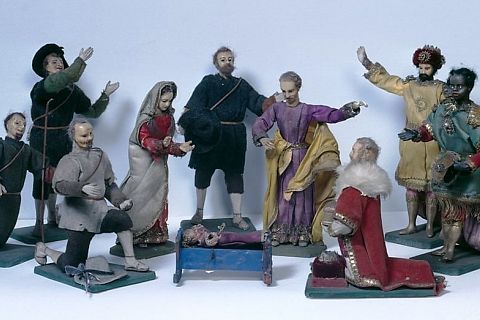