Home / News / Faucet, sepiolite, second half of the 19th century

Faucet, sepiolite, second half of the 19th century

The head of the pipe is carved from a seal foam or sepiolite in the form of an old bearded man with a night cap on the head. At the top of the head is a smoke release. The mouthpiece is made of horn. The faucet is preserved with the accompanying box, which is inside dressed in blue velvet, and outside in the leather. The box is shaped in the form of the pipe.
Sepiolite occurs naturally in river sediments and mineral veins. These clays, similar to clay, occur to a large extent in Asia Minor, Greece, Morocco and Spain. The substance occurs naturally in the form of fibres, granulates or in solid form. Due to the rapid absorption of tobacco smoke, it is used for making tobacco pipes.
The Slovenian name, the sea foam, got the substance at low density, making it float on the water surface. 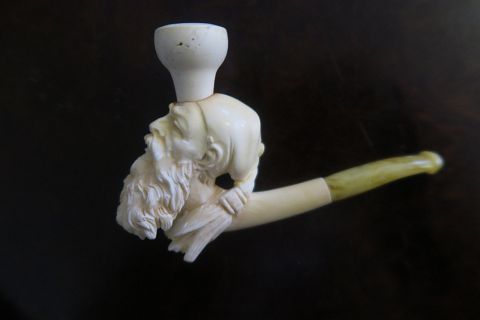