A motive painting, painted on wood, depicts the terrible accident of a young girl, Theresa Beč, in 1794. A simple painter tried to portray the girl’s fall as a kind of movie frame. There was an accident in a child’s play when Theresa was standing on a rock, following her fall from a rock above a chapel and how she was lying on the road with her head injured. A chapel and a wooden bridge over Nevljica are painted, and in the upper corner on the vestibules of the intercession world: St. John of Nepomuk and St. Theresa of Avila. In the left corner is the inscription: Theresia Bezh, Ano = 1794.

The motive image was created as a thank you for helping in the disaster. Customers have commissioned these pictures as a prominent personal thank-you note, but their message is more than that: pictures shows us many accidents in the family, at work, at play, in natural disasters or fires, while also hoping for their solutions. They show us the spirit of the time in which they were made.

The votive painting hung until 1945 above the chapel, which is gone. The chapel stood under the rocks of the Old Castle, where the town district Pod gora was facing the Plečnik Bridge and the beginning of Cankar Road in Kamnik. In 2016, it was purchased by the Intermunicipal museum Kamnik. 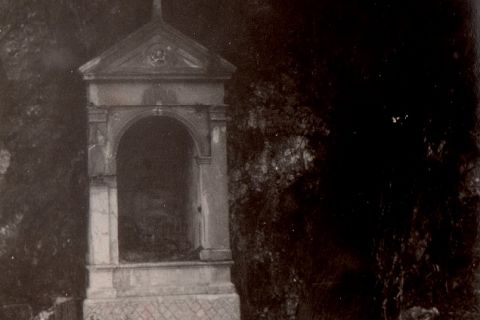