The votive image was created at a time when in Komenda the worship of St. Urban already greatly expanded. In 1752, the parish priest of Komenda, deserving cultural worker and educator Peter Pavel Glavar (1721-1784) acquired in Rome the relics of St. Urban martyrs who are still under the main altar today. In the picture we see St. Urban in a baroque dress of a Roman soldier in the upper left corner. As is the custom with votive paintings, this is divided into the heavenly part – with the saint St. Urban on the clouds and the earthly part – with kneeling persons praying. The earthly part occupies most of the picture: a married couple, judging by their dress of noble origin, kneel on the stairs. On the right behind the curtain is then a modern architectural element – a niche with currency and a vase. In front of the spouses is a four-poster bed, perhaps a marital one, more likely a child’s bed, which could indicate that they are asking for children in the marriage. In the lower right corner is the inscription Ex voto 1761. 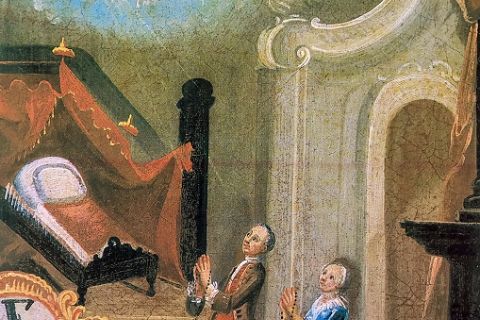