Home / News / The framework of the diploma received by Rudolf Maister, 1924

The framework of the diploma received by Rudolf Maister, 1924

On the birthday of General Rudolf Maister and on the commemoration of the Municipality of Kamnik, on 29 March 2019 Maister’s grandson, Mr. Borut Maister donated to the Intermunicipal Museum Kamnik and the Municipality of Kamnik an object that is invaluable to us. Especially because there are very few personal items from general Maister estate, and the first one is connected with Kamnik.
This is the framework of the diploma received by Rudolf Maister in 1924 as honorary citizen of Kamnik. On the occasion of the 50th anniversary, on 15 April 1924, under the leadership of Mayor Rihard Karba, the town of Kamnik gave Rudolf Maister a diploma of honorary citizen. According to the proposals by Josip N. Sadnikar, it was painted by Maksim Gaspari, while Ivan Klemen carved a golden frame with the Kamnik’s coat of arms.
The diploma shows two places that are closely connected with him – Kamnik with his Birth Star and Maribor with a knight on the edge. Among them is the inscription: “The town of Kamnik appoints his fellow soldier of the Yugoslav Army Rudolf Maister on the occasion of his fiftieth anniversary of his birth for irreverent merits, which he acquired for our young Yugoslavia, his honorable citizens. He freed himself with his bravery and determination, and he rescued Maribor and secured our northern border. Kamnik municipality on April 15, 1924 “.
Unfortunately, only the postcard of the diploma, which was taken by the Kamnik’s photographer Franc Aparnik, was preserved. The original diploma was destroyed by the Germans in Maribor in 1941, because the Maister’s family withdrew to Zagreb. Only the frame, which was now again in Maister’s birth house, was preserved. 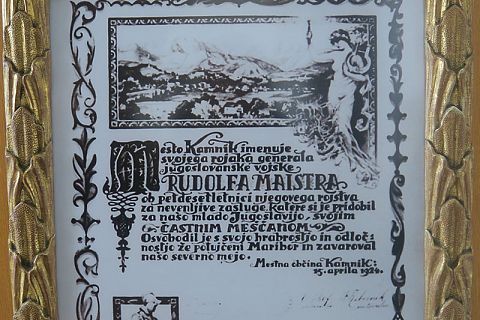 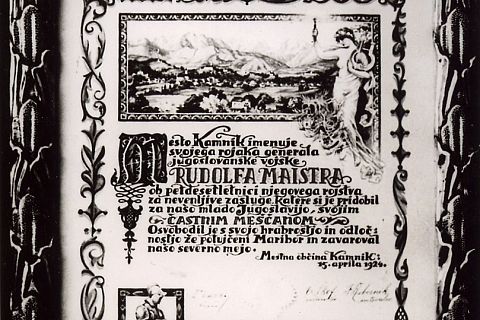