The leaflet was part of the Slovene plebiscite propaganda in Carinthia in 1920. It is shaped in the manner of the ten God’s commandments which the Slovenes in Carinthia should keep in relation to the German neighbours and, of course, about their decision on the plebiscite.

The Paris Peace Conference after the end of the First World War determined that a plebiscite would be decided on the border in Carinthia. South Carinthia was divided into Zone B under the Austrian Administration and Zone A under the Yugoslav one. On August 2, 1919, General Rudolf Maister was appointed as Commander of the Carinthian Frontier Command for Zone A, and after 1 May 1920 he was appointed Commander of the Carinthian Police Force. Together with his colleagues, he prepared plans for Slovenian political and cultural activities, such as publishing Slovenian newspapers, encouraging the establishment of readers and societies, organization of events for Yugoslavia, such as popular camps, gatherings, cultural events, etc., and prepared plans for plebiscite propaganda. The plebiscite in zone A was carried out on October 10, 1920. The results were unfavorable for Slovenia and the Carinthian Slovenes remained in the Republic of Austria. 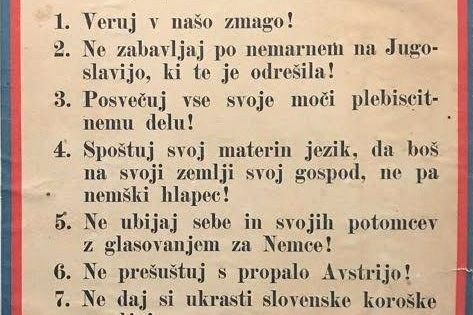