In the lapidary of the Intermunicipal museum Kamnik is preserved a tanner craftsman’s house mark from Kamnik. The central part represents the frame in relief. On the left edge of it are the stonecutter’s mark and the letters TA, and on the right edge are MA. Below them is a leather knife for skin cleaning. Next to it are holes that lead to the conclusion that with their help something was fixed or that the stone slab could be made as a house mark. In the frame there is a shield with a house coat of arms and a crescent moon on one side and a five-pointed star on the other. The shield above is dated 1549.

We also assume that the craftsman’s trademark is related to Lovrenc Merjasec, who had a leather trade in Kamnik at that time. The tax register of the town of Kamnik from 1545, published by A. Luschin, lists, among other craftsmen, one tannery, one belt, four furriers and six shoemakers. Lovrenc Merjasec is mentioned as a tanner. 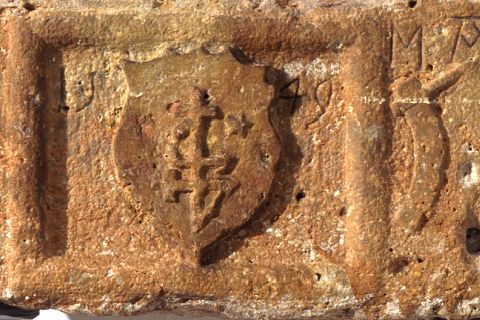