September 23, 2021, was a historic day for two halves of what was once the same whole that had been separated for centuries.

The lower part of the building inscription made of Pohorje marble (after the publication of Josip Klemenc, Three New Inscriptions from Celje and its surroundings, in the Archaeological Journal of 1951, p. 125) was found in 1950.

Klemenc writes in the publication how the lower half was found: “An excursion of archaeologists and historians of the University of Ljubljana discovered a considerable fragment of the monument on Jožef Brvar’s land, some 50 cm below the rubble, on his visit to Trojane on 23 March 1950″ /… / Next gives the dimensions of the preserved stone, the size of the letters and continues “From all this data, and especially from the thickness of the monument, we can conclude that the stone must have been quite large. The shape of the individual letters already tells us that in our case it is a monument from the second half of the second century AD. With even greater certainty, however, we can assert and infer this on the basis of the inscription itself, t. j. from its contents. ”

It was transferred for storage to the then City Museum of Celje (since 1966 it has been called the Celje Provincial Museum). He was entered in the inventory book under inv. no. L-191. In the book is the note, that the stone was discovered in 1949.

The upper part of the same inscription was discovered in 1874 on the same land and built into the houses in V Zideh 4, where two halves of the tomb for Hilar were built into the façade. All three pieces of stone monuments were bought in 1998 by the Kamnik Museum, which is territorially responsible for collecting material from the area of ​​the municipality of Lukovica. The former director, Mirina Zupančič, excavated several times in Trojane.

Dr. Jure Krajšek, curator of antiquity from the PMC and Janja Železnikar, curator. for archeology from MMK, in recent years they have agreed that the PMC will hand over the lower part of the marble inscription stone to the Kamnik Museum, so that the building inscription will be on display at the location where other monuments of ancient Atrans are also exhibited.

The inscription states that Marcus Aurelius and Lucius Verus made it possible to restore a burnt-out building, probably a public building (a customs building, an inn, perhaps a shrine) on Atrans. It is dated to the second half of 168. 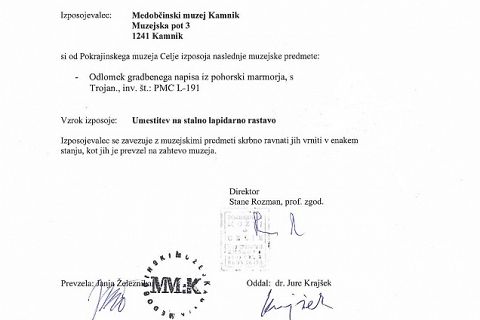 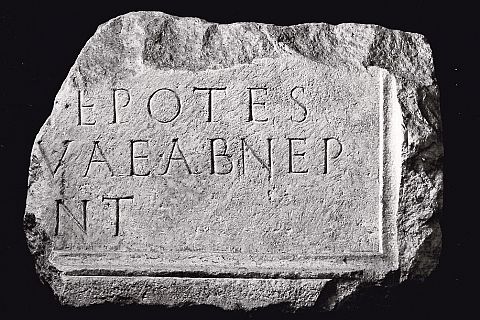