It is one of the few preserved Protestant prints in Slovenia. Another one is also kept at the Franciscan monastery in Kamnik. Only six of them are preserved in the world, this was found by Josip N. Sadnikar in Kneže in Carinthia. It was published by printer Mandelc in Ljubljana as an experiment for the entire Bible, which in our country could not come out for the purpose of persecuting Protestants. Pentateuch – the first part of the Bible was translated by Jurij Dalmatin.

The principle of the Protestant ecclesiastical community was that the Bible was the basic source of faith, which must also be understood by ordinary people. That is why they started translating the Bible into “folk” languages. This was also followed by Slovene Protestants with Primož Trubar. Jurij Dalmatin planned to translate: in 1578 the first part of the Bible was called Moses’s Books and in 1584 the entire Bible. With the Protestant translations, the foundations of the Slovenian literary language and the first Slovene printed books were laid. 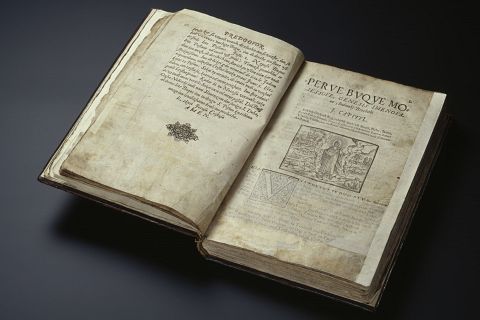