Home / News / Monument to the poet and playwright Anton Medved

Monument to the poet and playwright Anton Medved

It will soon be 50 years since the unveiling of the monument to the poet and playwright Anton Medved (1869-1910) in Graben. In 1969, the Tourist Association in Kamnik initiated the unveiling of a bust in honour of the 100th anniversary of his birth. For the monument, the commission chose a place in the park on Medved Street, opposite the poet’s birthplace. The bust was made by the academic sculptor Leon Homar from Kamnik. The monument was unveiled only in July 1970. At the unveiling of the monument, he spoke about Medved’s poetic work by prof. Emil Cesar: “Anton Medved lived in a time that marked a turning point in the existing social life, and on the other hand also a turning point in Slovenian culture. In a broader sense, however, this era is a harbinger of great social processes in the early 20th century. Understandably, such a time could not have been a fair judge for Medved and his work. A man who creates, who has an above-average measure of gift for the artistic design of his rich life experiences, which gives them an equivalent verbal image as being and is not an epigon. Medved builds his confession on examples that are still alive today. In order to indicate the problem in as much detail as possible, he uses examples from nature, in which, due to his expediency, coherence and natural and just legality, he actually seeks solace in his pain. And it is precisely because of this mental wealth of surprising conclusions, authenticity of life and conciseness of knowledge, which are always original, that Medved’s song becomes closer to us again. ” The men’s choir of the first Slovenian singing society Lira then sang some of Medved’s songs to many participants in the ceremony, including many national costumes. 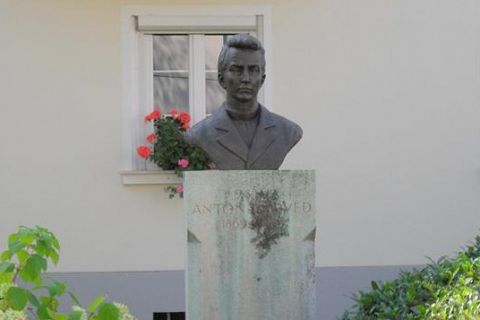