Coin mint money from the time of Henry IV. Andechs (1204–1228) and Frederick II. Babenberg (1230–1243). At least since 1195, the Andechs Mint of Money was mentioned in Kamnik and was influenced by the mint of the Patriarchs of Aquileia and the Archbishops of Salzburg. After 1220 they also minted money with the inscription CIVITAS STAIN. The era when foreign gentlemen, including the Bavarian noble family of the Andechs, opened mints of money on our land for commercial purposes, lasted from about the middle of the 12th to the middle of the 13th century. Throughout Kamnik and the Tuhinj valley, during this time, one of the most important trade routes was passing, connecting the Mediterranean countries with the eastern ones. 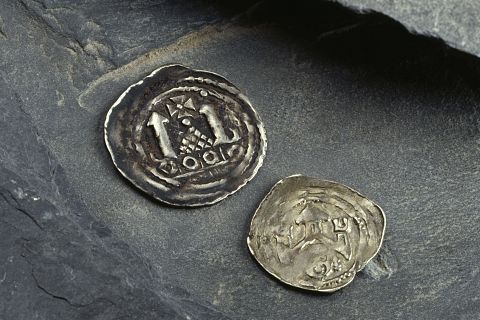