The magic knife has a special power in the treatment of sprains and fertilized hooves of cattle. With a specially decorated knife (nine crosses and nine crescents), the shepherd cut the grass around the injured leg of the animal and hung it on a stake. When it dried, the animal recovered.

The shepherd’s spirituality was also torn between superstition and the Catholic faith in the new century. People tried to protect themselves from danger by wearing blessed objects. We can only guess with what fears, uncertainty, respect they went to the mountains. Spells are also known to cure snake bites and other inconveniences. Many times, a cow ran out of milk because of a spell.

The knife was obtained from shepherds by the architect and conservator Vlasto Kopač, who began designing a collection of shepherd’s objects from Velika planina in the 1930s. With the financial support of the Municipality of Kamnik, in 2007 almost the entire collection of Vlasto Kopač was purchased, and the museum received 486 items of invaluable shepherd’s heritage. 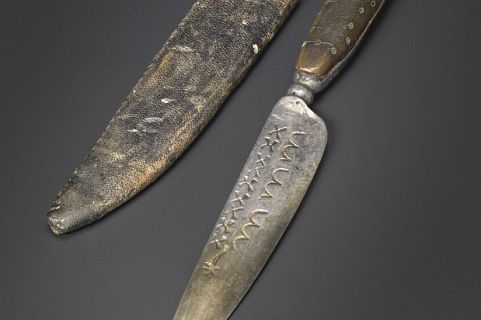