Ludwig Hermann, The old Town with the frozen canal, 1852

Ludwig Hermann is a 19th-century German painter (1818-1881) who lived and worked in Berlin for a long time. At the Academy in Berlin was a pupil of the famous German painter Nazarene and the romanticism of G. Schadow. He painted mostly marinas, architecture, old coastal towns, motives from the Netherlands and Belgium. His paintings are held by many European museums. The painter can, according to the motives, as per the time of painting, be compared with the Slovenian landscape painter Marko Pernhart.
In the 1850s, Hermann was especially interesting on Dutch and north German landscape, with old towns in different weather conditions. The painting was created in 1852, at a time when Hermann was painting in the Netherlands and was inspired by the Dutch and North-German landscapes of the 17th century.
On the left there is an old medieval city, surrounded by city walls. There is a frozen channel next to the city, with walking adults and skating children. In the foreground there is a group of people with a horse. The scenery makes the landscape cloudy, yellowish grey skies on the top, which in the distance go into a threatening darkness. In addition to the perfectly painted human images in the distance and groups of people in front of the city, special attention is paid to the painted pieces of ice beside the holes for catching fish.
More: Marko Lesar, Umetnine iz depojev kamniškega muzeja. 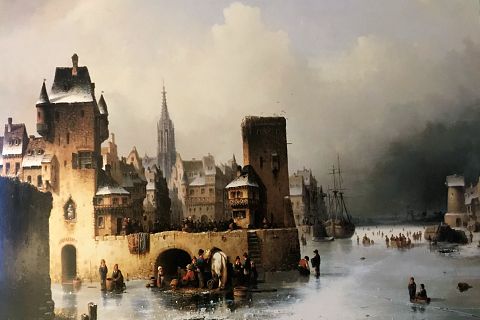