The special value is given to the painting, in addition to its exceptional quality, by the exact time of its creation and the signature of the painter Laurenz Joseph Stachl. It’s probably part of a sacristy closet. We can only speculate about the original location, but the possibility that the church of St. Joseph in Kamnik. The painter worked mainly in Styria around the middle of the 18th century. His most famous work is destroyed. This is a wall painting of the chapel of St. Lucia next to the old church in Teharje near Celje. His works in Svetina above Celje are also known, and the National Gallery also keeps some of his paintings.

In our picture, a small-figure depiction of a cross is shown, where human figures play the main role, the landscape in the background is blurred. In the middle of the picture are Jesus on the cross and Mary Magdalene kneeling beside him, who hugs him and kisses his feet. Mary on the left with elegantly wavy clothes and posture pathetically expresses feelings of sadness, on the right St. John, stoically calm, wipes away the tears with a tablecloth.

From the yellow-coloured scene of Golgotha, a view of the city of Jerusalem opens up next to Mary. The moon on the left and the sun in the clouds on the right add to the dramatic but at the same time mystical atmosphere. 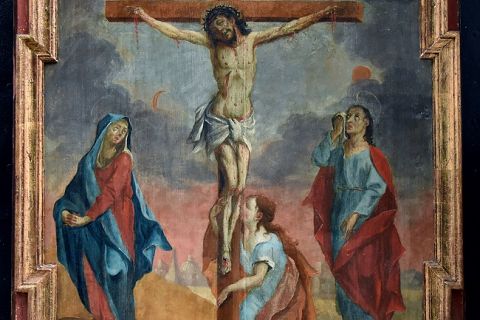