After that, Japelj and Kumerdej continued to translate the Old Testament, but the work was very slow: in 1791 they published only the first part of the Old Testament (1791), the third volume was translated by Japelj himself (1796), and then the work was continued and finished by others. The new translation was published for 18 years and at the end consisted of 11 volumes.

Jurij Japelj (1774-1807) was a Jansenist. The Jansenists were members of a current in the Catholic Church that was rational and strict about religious doctrine and morals. As enlighteners, they sought to raise the people culturally. Among the clergy in Carniola, Jansenism took root after 1770 and persisted for the first decades of the 19th century. Japelj was born on April 11, 1744 in Kamnik. Jurij studied with his compatriot Mihael Paglovec, a parish priest in Tuhinj. He finished high school and lyceum in Ljubljana, then studied theology in Gorizia, Graz and Trieste, where in 1769 he was ordained a priest. During his studies, he gained extensive language skills. After his ordination, he was first chaplain at St. Anton in Trieste. In 1773, the Bishop of Ljubljana, Karel Herberstein, called him to Ljubljana as a diocesan secretary and notary. He also gave him a major role in the realization of his Jansenist book plans. By his order, in 1777, Japelj began translating The Great Catechism with questions and answers. He then prepared books for church needs: hymnals, sermons, and prayer books. 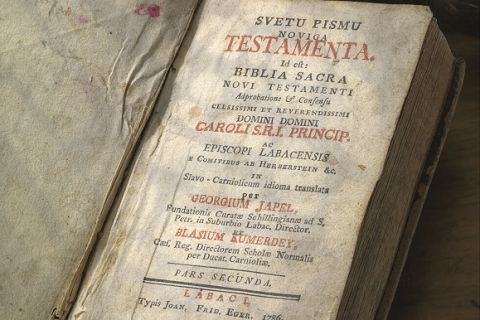