Small bread is a type of pastry typical of the Gorenjska region prepared from flour, honey, pepper, cinnamon, cloves and salt. Wooden models, in which they formed small bread, are partly in the 18th and mostly in the 19th century. On models, human and animal figurines, plant motifs and geometric figures and depictions of various objects were established. There are over a hundred different motifs, among them the most commonly chosen motive is heart for making small bread as love gifts.
The beginnings of this honey sweet bread date back to the 13th century, mainly in German lands. It is produced initially from rye flour, honey, with the addition of potassium and deer salt. Later, the rye flour was replaced by white, while the spices improved the flavour. From the first half of the 19th century, it became an ever more fashionable honey sweet bread, decorated with sugar dyes and inscriptions.
In Kamnik, the famous craftsman Stele was made this honey sweet bread. Their beginnings date back to the year 1701, when they started dealing with candlesticks and products of honey, and continue their tradition to this day. 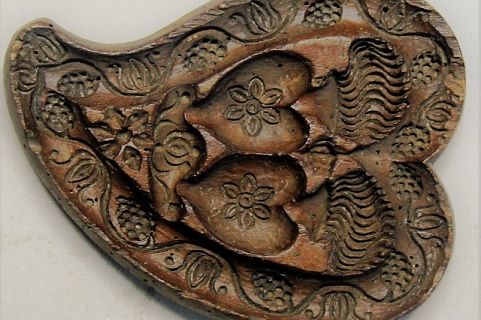