The Aparnik photo studio was in Kamnik for more than half a century, from 1895 to 1953. First photographer was father Franc Aparnik and from 1929 also his son Stane. Franc Aparnik was extremely broad in his motive and product range. A very important type of Aparnik’s photographic work was postcards. The rich offer was certainly helped by the fact that until World War I, Kamnik was a well-known spa and touristic town in Carniola. Thus, we find the first postcards with the motif of the Kamnik spa since 1896. A large number of postcards was issued by Aparnik after 1905. Most of his first postcards, somehow until 1918, are black and white and then dyed with handmade clichés. The widest offer of postcards was in the 30s of the 20th century.

The postcard depicts a view of the typical trade and commercial suburb of Sutna from south to north: on the left there are signs for Aparnik’s photographic craft and further trade with clothing and hats Vivoda; on the right is Rudolf Maister’s birth house and the magnificent parish church with a bell tower and a renovated facade with Toman’s statues made in 1909. The postcard is green tinted, the publisher was the photographer Franc Aparnik himself but was not dispatched. 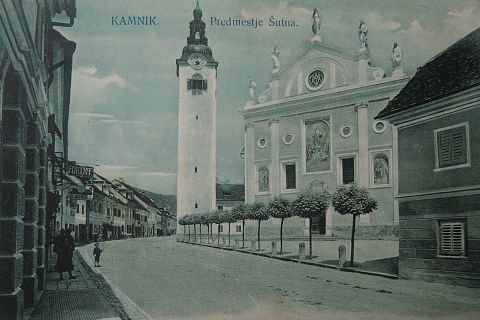