Fortunat Bergant was born in 1721 in Mekinje near Kamnik and died in 1769 in Ljubljana. He belongs to the second generation of Carniolan Baroque painters, and he was only engaged in table painting. He had great support in the nobility of the time (the Codelli and Erberg families), which was also his greatest patron. Members of different families have been depicted by the artist in numerous portraits. The depicted are painted distinctly individually and psychologically defined in a sophisticated dress with all the finely crafted details.

Most of Bergant’s sacral opus was created in the 1760s, when he returned from his studies at the Academy of St. Luke in Rome. These works still adorn the church premises and homes of private owners and are stylistically different from the aforementioned portraits – we see a simple domestic, somewhat naive expression in the saint’s faces.

One such example is Bergant’s work Mary with a Child (c. 1760), which is kept in the Intermunicipal Museum in Kamnik. Bergant’s painting is thus characterized by a duality between elegant mastery and popular naivety, which still divides researchers today, and therefore opinions about the painter differ. 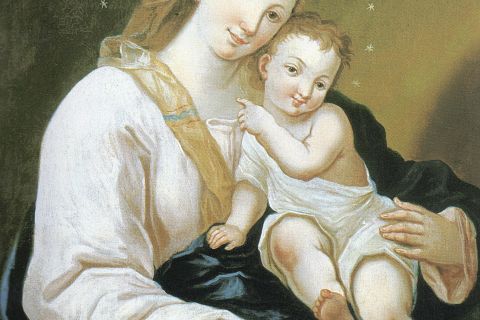