Tone Cevc, ethnologist, researcher and connoisseur of the Alpine world

On 31st of May 2022 would phd Tone Cevc celebrated his 90th birthday. He was employed as a scientist and researcher at the Institute of Slovene Ethnography ZRC SAZU for almost three decades. We joined forces with phd. Cevc’s cooworkers at the Institut, his family, colleagues and friends and prepared two diferent events in memory of him: an exhibition in the Atrium of ZRC SAZU (May 31, 2022), a screening of a film about dr. Cevec (June 1, 2022) in the Intermunicipal Museum Kamnik.

Tone Cevc (officially Anton) was born on May 31, 1932. The Cevc’s family, father Emil and mother Pavla Klempfer, lived in Mesto 77 (today Trg svobode 10). Tone had two older brothers: Emilijan and Janez and two younger ones: Primož and Pavle. In 1938 the family moved to Ljubljana, to Bežigrad, where in 1939 he entered primary school (now Dr. Vito Kraigher Primary School), and in September 1943 in III. State Real Gymnasium (today Gymnasium Bežigrad).

After graduating in 1952, Tone Cevc enrolled in the study of ethnology and art history at the Faculty of Arts, University of Ljubljana. His life path was strongly marked by professors, according to whom he summarized research methods of field work and the way of documenting and collecting material. Very soon he became involved in ethnological research work among Slovenes in Carinthia and Austria. An example and great support for him was phd. Milko Matičetov, who was also his mentor later. In 1957 he defended his dissertation entitled Shepherd’s Life on Velika, Mali and Gojška planina in the Kamnik Alps.

In December 1971, he got a job at the Institute of Slovene Ethnology ZRC SAZU. From 1994 to 1998, he was president. He studied pastoral spiritual and material culture, especially architecture and alpine farming in the Alpine region. The Alps were the core and focus of Cevc’s study.

He has been awarded several times for his professional work and scientific achievements.

Tone Cevc has attended international professional conferences, at home and abroad. He also collaborated and gained knowledge and experience from foreign colleagues: in Austria, Germany, Switzerland and Italy. In 1995, he organized a high-profile international ethnological conference in Planšarske stavbe v Vzhodnih Alpah, with the participation of seventeen researchers from Alpine countries.

He had an extraordinary sense of fellow man and the material he was studying. He was open to collaboration and networking with other sciences and experts. He connected with historians and art historians, and included in his research the findings of linguists, geographers and especially archaeologists with whom he began collaborating in 1996, and since 1999 this collaboration has intensified. Together with friends Miran Bremšak and France Stelet and archaeologists from the Institute of Archeology ZRC SAZU, they opened a new chapter in the archeology of the high mountain world. He always brought the started works to the end, to the publication, to the lecture, to the presentation. In 2006, he crowned his ten-year archaeological research and collaboration with archaeologists with the collection of scientific papers Človek v Alpah.

Dr. Tone Cevc ended his fruitful life on February 10, 2007. He left quietly and unexpectedly. He and his greatness are attested to by a rich legacy preserved in documentary material, photographs, monographs, articles and other publications. Let’s make sure we keep this heritage, for ourselves and our successors. 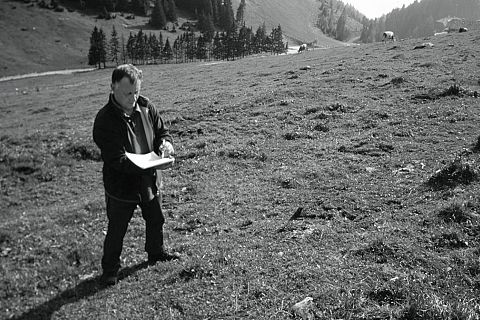