Martin Ramoveš (1989) completed his studies of art pedagogy at the Faculty of Education in Ljubljana. He is a creator who works in the fields of music, comics and poetry.

In 2007, Martin Ramoveš, together with bassist Marko Petrič and drummer Luka Drobnič, began to play their cantorum songs in the band Martin Ramoveš Band. He has already recorded three music albums – Zvok dežele (2011) and the music albums in the comic strip - Nesojeni kavbojci (2014) and solo album Astronomy (2016). As the last great work, he contributed his comic-based animated cartoon in the documentary film of the Buldožer music group (2017).

“Music album” in the comics is an interdisciplinary design of the work of art, which combines both visual as verbal as well as musical content. All three components are intimately interconnected. Martin Ramoveš, who, in fact, from childhood is reflected in tiny thumbnails, is actually upgrading his poetry with the musical basis. Behind him there are already two music albums in the comics – the group album Nesojeni kavbojci and the solo album Astronomy, which have a special place within comic art, because this is the connection of the visual and the verbal, which overlaps them and connects them in a common expression, poetry.

In the album Nesojeni kavbojci Ramoveš holds the content of an appropriately expressive hardcore drawing style. Ramovš's solo album comes in the form of a book; the sequences are less numerical, the stylistic drawing softens, becomes clearer, cleansed. The text of the whole album is linked by a single figure-a lost squirrel which monitors the fate of individuals, who in no way fall into the existing system of the world, in which empty people, empty words, idle talk dominate. 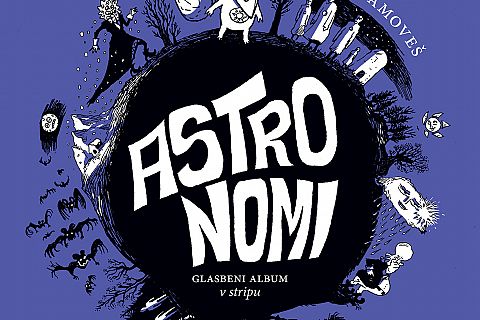