Home / Exhibitions / Ivan Vavpotič - a giant of the portrait

Ivan Vavpotič - a giant of the portrait

The exhibition Ivan Vavpotič, a giant of the portrait, sculpts the artist at all levels of his work. Vavpotič was not only a bourgeois portraitist, which we prefer to associate him with, but he was an extremely talented artist who certainly set up important place for Slovenian book illustration.
Ivan Vavpotič was born on February 21, 1877 in Kamnik. He attended gymnasium in 1888-97 in Novo mesto, where he also attended a course of hands-free drawing in addition to the regular program. After graduating he went to Prague, enrolled first at the Conservatory, but soon enrolled at the Royal State Academy, where he studied painting and figural composition at V. Brožík and V. Hynais, and the landscape with J. Mařák and M. Pirner. Between 1900 and 1902, he pursued his studies in Paris (École de Louvre, Prof. B. Constant and École des Beaux Arts) and, in the course of the year, also in Vienna. He graduated in Prague in 1905, where he became a teacher of drawing and art history at Strak’s Academy, and continued his studies at Hynais. In 1906, he returned to his homeland and until 1910, he taught hands-free drawing on a gymnasium in Idrija. In the period 1910-15, he lived in Ljubljana as a freelance artist, and in 1915 he held an office exam in Graz and until 1918 at the Military Press Office (as a painter on the battlefields and in the hinterland). At the end of the war, in 1926-29, he led the stage design workshop of the Ljubljana Drama and Opera, and then until his death he acted as a freelance artist. He was one of the main initiators and associates of professional associations in Ljubljana, the organizer of the exhibitions, and he was among the initiators and founders of the Lada II and DSLU society, and he worked to improve the material and moral situation of artists. He died in 1943 in Ljubljana.

Vavpotič’s opus is extremely extensive and includes oils, drawings, sketches, percolations, watercolours, pastels, tempers, motifs and figural compositions, portraits, landscapes and still-life. He made initials, vignettes, ornamental covers and other fine prints for book and magazine printing, book illustrations, drawings for occasional purposes, cartoons, posters for theatre performances, permanent adhesives for the Ljubljana fair etc.
His work is also connected with the first stamp. At the time of the establishment of the state SHS (Slovene, Croats and Serbs), the government commissioned him to produce a new brand. He submitted several drafts, Verigar – man with a chain, was selected which was printed in 1919 for several values.

The exhibition is the result of the cooperation between the Intermunicipal Museum Kamnik and the Dolenjski muzej from Novo mesto, so they will also exhibit at Kamnik and Novo mesto. Selected works at the exhibition come from various institutions (the National Gallery of Slovenia, the Intermunicipal Museum Kamnik, the Ljubljana City Museum, Dolenjski muzej Novo mesto, Belokranjski muzej v Metliki) and private collections. At both exhibitions, an extensive opus of the artist’s diverse work will be shown.
At the exhibition, a joint representative catalog, designed by Vladimir Ristić, was published along with the curators Saša Bučan (Miha Maleš Gallery, Kamnik) and Katarina Dajčman (Dolenjski muzej Novo mesto). The exhibition will be on display until February 28, 2019 at the Jakčev dom in Novo mesto and at the Miha Maleš Gallery in Kamnik until May 31, 2019. 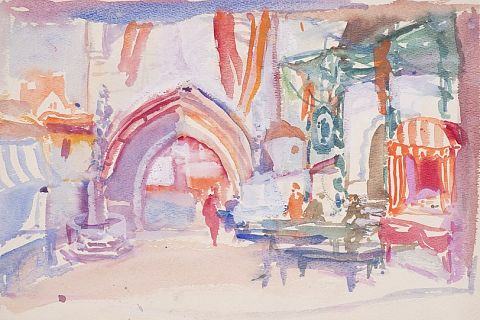