The exhibition shows the building development of the Zaprice manor from the middle of the 14th century and the life behind the manor walls in the 19th and 20th centuries, when the manor was also visited by famous holidaymakers during the summer months. And until the confiscation of property to the last owner Elizabeth Schneid-Rechbach in 1946, post-war life at the manor until the establishment of the museum in 1961.

It most likely had a main building in the form of an unfortified two-storey tower. Located on the ground floor was the central vestibule with a wooden staircase and adjacent to it a kitchen. There were living quarters on the first floor and a hall on the second floor.

Around 1550, the then owner Georg III. Lamberg from Črnelo decided to demolish the old medieval building and replace it with a new one, which was strongly opposed by the citizens of Kamnik. Perhaps the walls of the medieval tower were damaged by a strong earthquake in 1511.

The new suburban manor was built in the form of a relatively small monolithic three-storey rectangular prism-shaped building presenting four facades, two with 2 and the other two with 3 window axes. A bracketed cornice was installed on the main building under a steep hipped roof and the external corners accentuated with diagonally positioned oriel towers, which were a symbol of the noble standing and ambition of the Lamberg family.

Zaprice manor experienced the peak of its architectural development during the 18th century. In 1757 it was bought by Anton Medard Wiederkehr, who chose 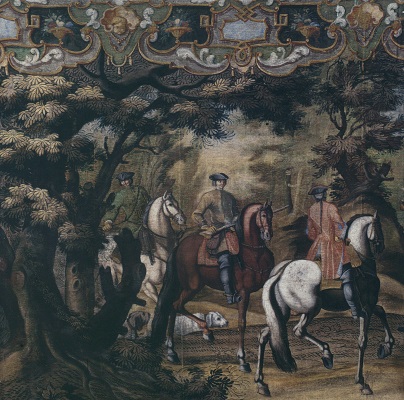 to carry out a large-scale remodelling of the manor, and on account of this also took on a great deal of debt.

The main building was extended to the north-west by one third of its floor plan, and the whole was given a new late Baroque appearance. On the exterior, all four corner oriel towers and the bracketed cornice were removed, and a comprehensive new late Baroque façade layout with accentuated window frames on both floors and the main portal was designed. Inside the new extension, an elegant three-flight vaulted baroque staircase was built, and two large rooms on the south-west side of the second floor were embellished with exquisite wallpapers depicting figural scenes and dating back to the mid-18th century. To the west of the manor, at the foot of the rise, a relatively large four-winged Meierhof was erected and became the economic hub of the Zaprice seigniory.

Leopold von Wiederkehr-Wiedersbach sold Zaprice in 1830 to Franc Pirh, who kept them until 1871. In 1871, the renowned Carniolan industrialist and politician Fidelis Terpinc (1799–1875) bought Zaprice at auction. After his death, his widow Josipina inherited Zaprice manor and sold it in 1878 to Vienna native Josef Schneid Treunfeld, who had been a member of parliament and governmental advisor since 1879. In 1895, a well-maintained manor was damaged by the Ljubljana Easter Earthquake. This was when the ceiling of the salon or main hall on the second floor received a new decorative ceiling painting, while the Baroque wall paintings and painted wallpaper on the walls were left intact. In 1919 his son Josef (1869–1929) became the sole owner of Zaprice manor.

After the First World War, the rooms in the manor were rented out to Kamnik families, and between 1923 and 1938 to holidaymakers as well. The whole Schneid family enjoyed spending their summer holidays at Zaprice, where they also socialised with holidaymakers, the so-called Zapricites (slov. Zapričani) – the families of renowned Slovenian poets, writers, critics, intellectuals and others.

The most enthusiastic and loyal visitor and guest of Zaprice and Kamnik was Oton Župančič with his family. They spent their one- or two-month holidays at Zaprice between 1923 and 1930. Oton is said to have written some very successful poems in Kamnik in the Vinska trta inn at the Vivod’s; this is also the place where he is supposed to have started writing his play Veronika Deseniška, which was published in June 1924. And in conclusion, in 1928 Oton Župančič became

an honorary citizen of Kamnik.

Janko and Nora Lavrin were also well-known holidaymakers. Lavrin was between 1923 and 1953 also professor of Slavonic studies at the University of Nottingham in England. There he met the painter Nora Fry and married her in 1928. He and his wife Nora rented a simple room in Zaprice in August 1928, when they were on their honeymoon.

After returning from prison, Elizabeth supported her children by working in the Ceramic–Chemical Industry Kamnik, where she painted ceramics and majolica wine jugs. In mid-1957, Hermann Rechbach was released after serving his reduced prison sentence. The family moved to Austria that same year.

Under the Denationalisation Act, the Rechbach heirs filed a claim for the return of the property in 1992. The procedure for the Zaprice manor complex ended in 2009, and the Municipality of Kamnik became the owner.

After the end of the Second World War, Zaprice manor experienced the fate of many Slovenian manors and castles. It was a school for political cadres for some time after the war, then the manor

was occupied by the army and, in the school year 1949–50, it became a student hostel. After the relocation of the student hostel in 1953, the vacated buildings of the manor complex became family housing for locals and newcomers. The buildings were, of course, unsuitable for family housing. There were problems with the supply of water, toilets, heating, damp.

The Museum of Kamnik was officially founded on 4 December 1961 and was to be housed in the Zaprice manor complex, which was at the time in extremely poor condition. From 1962 onwards, the buildings of the manor complex were systematically and thoroughly restored, investigated and renovated in accordance with the requirements of the museum.

Simultaneously, a museum was developed with content that brings the movable cultural heritage of the wider Kamnik area closer to the visitor in various ways; with rich collections, through cooperation with its environment, creators, users and guardians of cultural heritage.