Within the Slovenian space, Gvardjančič’s work, his entire work, is of the utmost importance, since it is a painter who, with many novelties happening in the field of art, has been following his idea from the very beginning, which he is developing today. And as in the very beginning, he is and remains in his expression an artist of subtle sensation, thus interfering with the universal language of art, which, however, resonates only in the ears of those who have the same degree of subtle sensation. Herman Gvardjančič (1943) was born in Gorenja vas near Reteče, where he lives and works today. He attended the School of Arts and Crafts in Ljubljana and from 1964 to 1968 studied at the Pedagogical Academy, where he was taught by professors Zoran Didek, Milovan Kranjc and France Uršič. At the same time, he studied painting at the Academy of Fine Arts (among others Maksim Sedej, Marij Pregelj), and graduated with a specialization in painting in 1971 from Professor Zoran Didek. After his studies he traveled to various European countries. He worked as an art teacher and since 1997 has been a professor at the Academy of Fine Arts in Ljubljana. Gvardjančič’s painting is presented at numerous exhibitions in Slovenia and abroad, and the artist has received numerous awards for it (Prešeren Fund Award, 1981; Grohar Award, 1988; Jakopič Award, 1990; Grand Prix of the May Salon, 1996;).

As the curator Sasa Bučan wrote in the catalogue: “… In her last cycle, Herman Gvardjančič leans on Fordlandia, which is not questioned as a historical fact, but more than a utopia, the seeker of which, to some extent, may be himself in the desire for something brighter. , good, ideal, because throughout his artistic confession, he is confronted throughout the ages with the darkness of humanity, in which there is no place for the invasion of light, a world that is more or less robbed of emotions and, as he himself says, never truly in the light of life believed. The title of the exhibition reminds us of Gvardjančič’s other passion and assistant, who, in addition to presenting his inner worlds through the line record, simultaneously creates the depths of his work, music. In order to better understand the emotionality and sensibility of the artist in front of us, certainly the music of the world-renowned Icelandic artist, Johann Johannsson, has led the last works that eruptively come into the light with extremely reduced means – a charcoal drawing that sometimes mixes individual colours, most often shades of yellow and purple … “ 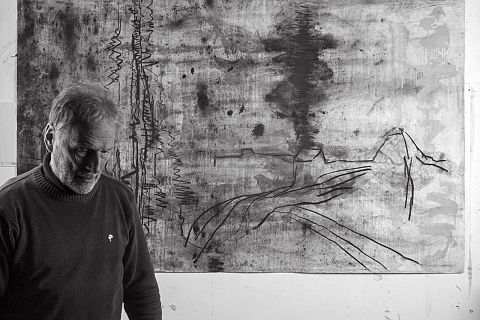