Božidar Jakac was born on 16 July 1899 in Novo mesto, where, in addition to primary school, he also attended the first grade of the Novo mesto grammar school. In 1913 he continued his education at the high school in Idrija, where he passed the military matura exam. In 1917 he was drafted into the Austro-Hungarian army; among other things he was a participant in the last great Austrian offensive on the river Piava. While treating bites in Opava, he became interested in pastel in one of the art galleries, which later became his main expressive art technique. In 1918 he exhibited for the first time (two drawings) at the XV. art exhibition in the Jakopič Pavilion in Ljubljana. Between 1919 and 1923 he studied at the Academy of Arts in Prague with professors Jakub Obrovski and Franz Thiele, and was the first Slovene to complete a graphic specialization with professors August Brömse. He completed his studies with excellent results and special praise from the faculty. During his studies, he acted as the initiator of the event called “Novo mesto Spring” in his home environment of Novo mesto. During this time, he also became interested in photography and filmmaking. Numerous trips to Europe (Berlin, Dresden, Venice, Paris, Bergen), America and North Africa later produced a huge number of slides and films. His photographic and film recordings from his travels in Slovenia are also very important, with many famous and important personalities, events, places and ethnographic motifs. He is the author of the first propaganda film Spring Fashion (1933) and the first Slovenian colour film Železarna (Iron factory) Jesenice (1938).

During the Second World War, he was a member of the partisans from September 1943, where he was elected president of the Slovenian Art Club at a cultural gathering in Semič in Bela Krajina. In the same year, he was elected to the plenum of the OF at the Assembly of Deputies of the Slovene Nation in Kočevje. As a member of the Slovenian delegation, he attended the II. AVNOJ session in Jajce, where he portrayed Marshal Josip Broz Tito. After the war he was a selfless organizer and rector of the newly established Slovenian Academy of Fine Arts (1945-1947 and 1947-1949 and 1959-1961) and one of the initiators for the establishment of the International Ljubljana Biennial of Graphic Arts.

He was primarily a prolific draftsman, graphic artist and painter of pastels and oil paintings, he devoted himself to illustration, and in small graphics he also cultivated other genres until the design of stamps. He died on 20 November 1989 in Ljubljana. He is buried in the Novo mesto cemetery in Ločna.

For his work, Jakac has received a number of domestic and foreign awards and recognitions, including the AVNOJ Lifetime Achievement Award (1967), the France Prešeren Award four times (1947, 1948, 1949 and 1980) and the Janez Trdina Award in Novo mesto. He was a full member of the Slovenian Academy of Sciences and Arts and a corresponding member of other Yugoslav academies, a member of the European Academy of Sciences, Arts and Literature in Paris and an honorary member of the Academy of Drawing in Florence. He was an honorary member of many Slovenian towns and cities in the former Yugoslavia and received all the central cultural state awards. The permanent collections of his works are kept by the Božidar Jakac Gallery in Kostanjevica na Krki and the Jakčev dom Gallery in Novo mesto.

Božidar Jakac’s exhibition will be on view until 27 August 2022. 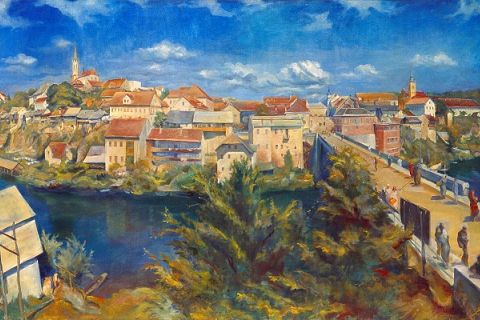