Michael Thonet (1796-1871) was a man who, through his invention, brought together European and even world countries. His attempts to bend wood began in the 1830s. In 1859, he invented and made a chair no. 14, its most successful sales item. It was designed for mass production and by 1930 it was produced in over 50 million copies. Chair no. 14 decisively marked the equipment of public and private spaces in cities and in the countryside until the end of the First World War, in particular it was known as a cafeteria chair.

Chair no. 14 is a typical example of Thonet’s successful technical and design invention, as well as commercial success: lightweight, durable, consisting of only 8 pieces of wood and a knitted seat. For the purpose of easy assembly and better use of the ship’s transport, they were exported to the countries of the North and South America exhibited.

Because of the fragility of the product, many doubted its durability – they tried this for advertising purposes in such a way that chairs passed through the windows from the second floor – yet they remained whole and even usable.

Chair no. 14 also manufactured in a factory at Duplica near Kamnik, one of the longest running factories of bentwood furniture in Slovenia, since 1907 until the end of the 1990s. 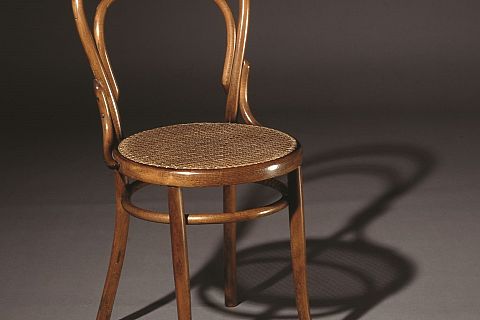